The Signs of Adderall Abuse

Is Adderall the Next Opioid Crisis?

The addictive and destructive nature of Adderall is downplayed or dismissed because it is a popular prescription drug. With a high potential for addiction, the nonmedical use and abuse of Adderall is giving rise to a potential new drug abuse crisis, one with disturbing similarities to the current opioid epidemic.

Adderall is a prescription stimulant drug that has also been increasingly used illegally since its introduction to the market as an orally administered pill in 1996. When prescribed correctly, the drug is intended to treat symptoms of narcolepsy and allow persons with ADHD to increase attention span and focus. When misused, Adderall can cause a variety of negative side effects[3] including:


The Chemical Make-up of Adderall

Adderall is a mix of amphetamine and dextroamphetamine, both stimulants that increase a person’s dopamine and norepinephrine levels.

A chemical responsible for transmitting signals in the brain, called a neurotransmitter. Simplistically, dopamine plays a role in rewarding a person’s behavior. While this can be good if it is encouraging a healthy behavior like when a mother embraces their child, it can also be bad if what is releasing the dopamine is not a healthy behavior. This is why recreationally taking drugs that release dopamine can lead to the problems of drug abuse and addiction.

A neurotransmitter and a hormone that transmits signals across nerve endings throughout the body. Norepinephrine improves focus and alertness, increases energy, helps wake the body, improves memory storage, regulates stress reactions and more. Science is not definitive on the role of norepinephrine in the potential for drug abuse[13] and addiction, but the fact that it works with dopamine and may suggest it plays a role. Psychologically, the effects of increased norepinephrine can lead to abuse and addiction.

Who Is Abusing Adderall? 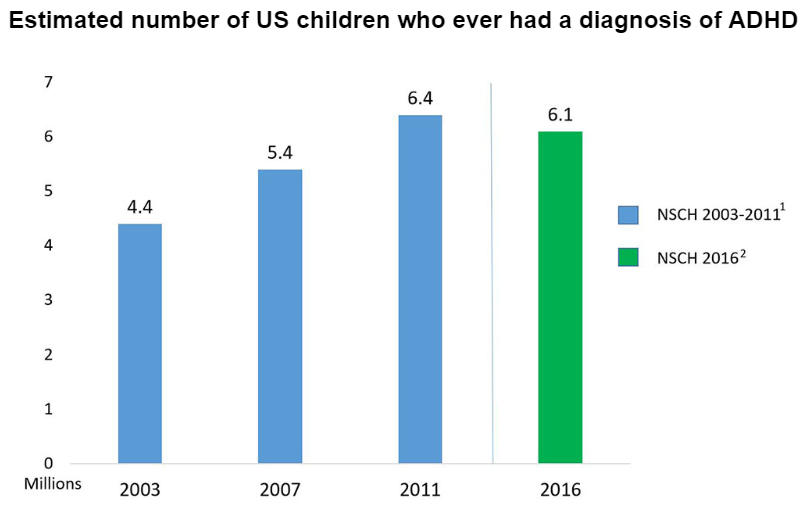 Children Under the Age of 18

The U.S has the highest rates of ADHD diagnosis in the world, with one out of every ten children, or 6.1 million children[2] under the age of 18. While not all children using Adderall are mis-prescribed, it has been increasingly apparent that Adderall is being over-prescribed for children and having detrimental effects despite good intentions.
Young Adults (Ages 21 to 24) and Adderall 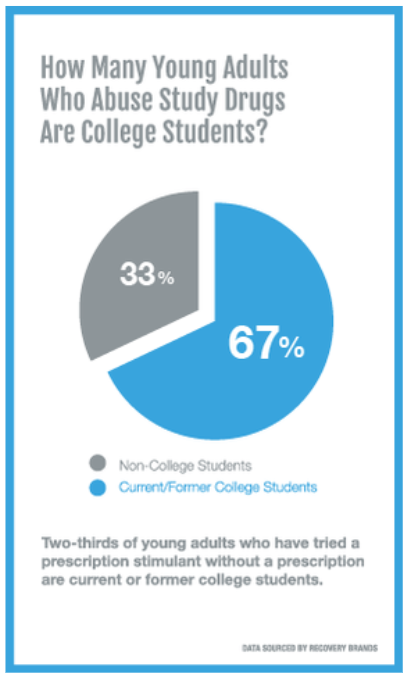 There is no no one way to tell if someone is on Adderall, but the population most likely to abuse Adderall are college-aged students from 16 to 25, mostly in order to meet the demands of academic life. Somewhere around 12%[4] of all college students in 2018 were thought to be abusing Adderall in some way, which is a very high number.

A small population of these same young adults are abusing Adderall for recreational purposes, mostly to be able to “party” for longer while socializing and consuming alcohol or other drugs. The dangers of mixing Adderall and other drugs, including alcohol, have led to dramatically increased adverse events including seizures, hallucinations, heart complications and more. The number of emergency room visits related to ADHD drugs has almost tripled from 2005 to 2010, showing clear signs of Adderall abuse. 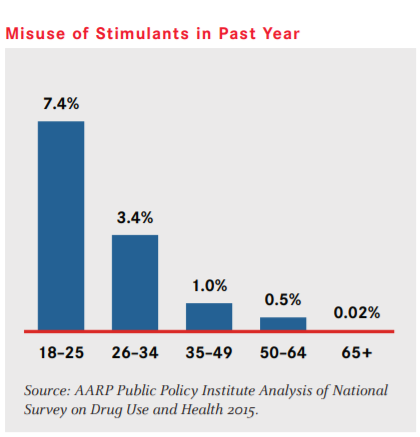 As with the younger age bracket, adults ages 25 to 30 are misusing and abusing Adderall in order to meet the demands of modern work and social culture. Somewhere between 6%-7% adults in 2018 within the 25 to 30 year old age range were believed to be misusing Adderall.

Some reasons people ages 25 to 30 cite for misusing Adderall include[6]:

As of 2018, signs of Adderall abuse were slightly higher in men than in women ages 19-30 years old. 9.8% of men used Adderall versus 7.9% of women. A survey among college students in 2005 shows that there are a lot of differences in how men and women misuse prescription stimulants [5].

Why Are People Abusing Adderall?

In 2005, a random sample of 4, 580 college students were surveyed about their illicit use of prescription stimulants [5]. Adderall was cited as the drug most used by students in the study. The survey revealed the top reasons the study participants misused Adderall as:


Are the “Benefits” of Adderall Actually Worth It?


Among the reasons people cite for using prescription stimulants like Adderall, the prevailing theme is that they are being used to meet the increasing demands of their daily lives, instead of healthier alternatives.

Ironically, there is evidence that the nonmedical use of Adderall and similar drugs doesn’t provide the positive focus and concentration effects that users believe it does. A study on the impact of psychostimulants on sustained attention[10] showed that 75 minutes after receiving dextroamphetamine, study participants’ attentional performance was 4% better than those that had received placebo. Participants also had better focus at baseline than the control group. There were no benefits at 12 and 24 hours after taking the drug. At the 75 minute and 12-hour mark, all participants’ working memory performed the same[11], whether they had received the drug or not.

The Dangers of Adderall Use

Adderall is a Schedule II controlled substance[7], meaning that it has a high risk for abuse and dependency. Drugs in this schedule also have the potential to lead to severe physical and psychological dependence.This risk is present when taken with a prescription, so the risk is even more when the drug is misused and abused. Sign of Adderall abuse and long term effects include seizures, organ damage, brain damage and more.

Adderall Effects on the Brain

The way that Adderall increases dopamine and other neurotransmitters in the brain change the way that the brain’s reward center functions. Without the drug, it becomes more difficult for the brain to stimulate this part of the brain on its own and in the normal way – leading to dependency. Often, increasingly larger amounts of the drug are needed to achieve the same effects due to the tolerance that the brain builds up.

The most common withdrawal effects for someone who has developed a high tolerance for the drug are depression, headaches, difficulty concentrating, anxiety, insomnia/oversleeping and suicidal thoughts, among others. Withdrawal symptoms can begin anywhere from 6 to 36 hours after use and last anywhere from 5 days to 4 weeks[8], depending on the severity and length of a person’s Adderall use.

Recognizing the Signs of Adderall Overdose

On its own, Adderall doesn’t have a high potential for overdose[9]. When Adderall is being used recreationally, it’s often used in tandem with alcohol and party drugs, which significantly increases the potential for overdose. The stimulant effects of Adderall can mask the normal reactions of the mind and body to dangerous intake levels of alcohol and other drugs. The common signs of an overdose may include:


Recognizing the Signs of Adderall Abuse in Friends and Family

The signs that a friend or family member may have an Adderall or other stimulant dependence can range from subtle to severe, be physical, psychological, or both. It is recommended that a medical/psychological professional be consulted if someone is exhibiting these symptoms:


Is Adderall the Next Opiood Crisis?

The short answer is yes, there’s a very large possibility. The annual nonmedical use of Adderall has significantly increased over the last several years. The National Institute on Drug Abuse put use for the 19-28 year old age group at 9.1% in 2018[4], which is the highest number since 2009.

Between 2009 and 2018, there was a significant 2.1% increase in nonmedical Adderall use for the 19-28 year old age group. From 2005 to 2010, the number of Emergency Department visits involving nonmedical use of ADHD drugs increased from 5,212 to 15,585 visits [12]. These increases show a dangerous trend, especially as the demands of college and professional life increase on young adults. 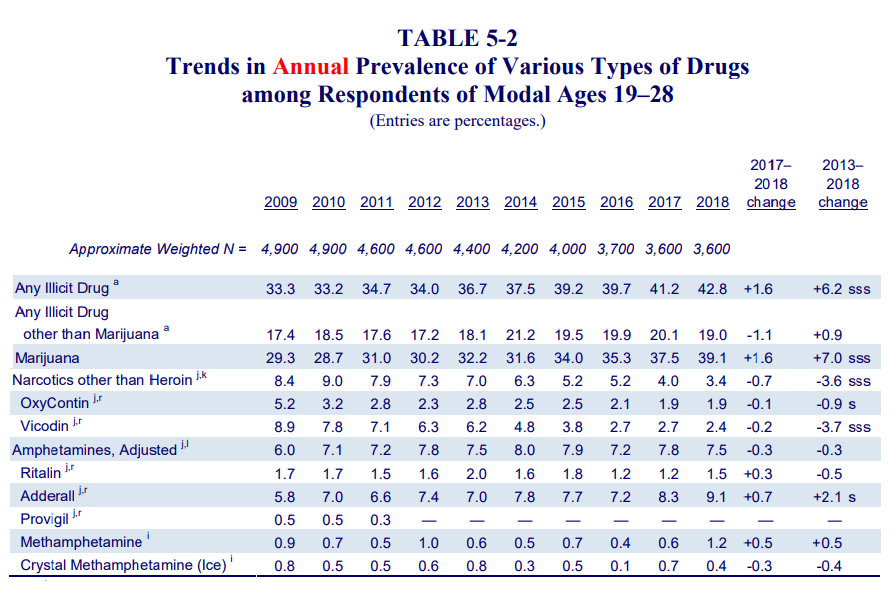 Current Adderall misuse among young adults may carry on later into adulthood and create a domino effect of unintended negative consequences and substance abuse. It will remain to be seen if nonmedical Adderall use continues to increase Like the current state of widespread opioid abuse, prescription stimulant use may develop into another societal drug crisis.